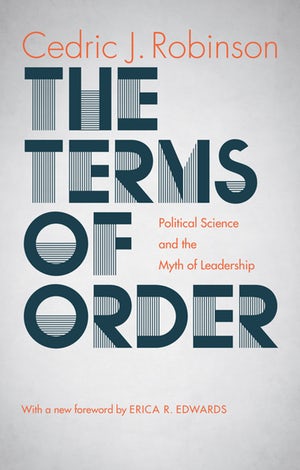 Cedric Robinson, The Terms Of Order: Political Science and the Myth of Leadership

Do we live in basically orderly societies that occasionally erupt into violent conflict, or do we fail to perceive the constancy of violence and disorder in our societies? In this classic book, originally published in 1980, Cedric J. Robinson contends that our perception of political order is an illusion, maintained in part by Western political and social theorists who depend on the idea of leadership as a basis for describing and prescribing social order.

Using a variety of critical approaches in his analysis, Robinson synthesizes elements of psychoanalysis, structuralism, Marxism, classical and neoclassical political philosophy, and cultural anthropology in order to argue that Western thought on leadership is mythological rather than rational. He then presents examples of historically developed “stateless” societies with social organizations that suggest conceptual alternatives to the ways political order has been conceived in the West. Examining Western thought from the vantage point of a people only marginally integrated into Western institutions and intellectual traditions, Robinson’s perspective radically critiques fundamental ideas of leadership and order. 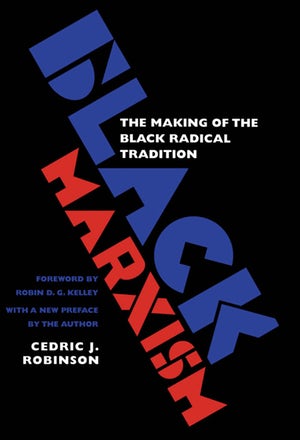 In this ambitious work, first published in 1983, Cedric Robinson demonstrates that efforts to understand black people’s history of resistance solely through the prism of Marxist theory are incomplete and inaccurate. Marxist analyses tend to presuppose European models of history and experience that downplay the significance of black people and black communities as agents of change and resistance. Black radicalism must be linked to the traditions of Africa and the unique experiences of blacks on western continents, Robinson argues, and any analyses of African American history need to acknowledge this.

To illustrate his argument, Robinson traces the emergence of Marxist ideology in Europe, the resistance by blacks in historically oppressive environments, and the influence of both of these traditions on such important twentieth-century black radical thinkers as W. E. B. Du Bois, C. L. R. James, and Richard Wright.

Cedric Robinson, An Anthropology of Marxism

An Anthropology of Marxism offers Cedric Robinson’s analysis of the history of communalism that has been claimed by Marx and Marxists. Suggesting that the socialist ideal was embedded both in Western and non-Western civilizations and cultures long before the opening of the modern era and did not begin with or depend on the existence of capitalism, Robinson interrogates the social, cultural, institutional, and historical materials that were the seedbeds for communal modes of living and reimagining society. Ultimately, it pushes back against Marx’s vision of a better society as rooted in a Eurocentric society, and cut off from its own precursors. Accompanied by a new foreword by H.L.T. Quan and a preface by Avery Gordon, this invaluable text reimagines the communal ideal from a broader perspective that transcends modernity, industrialization, and capitalism. 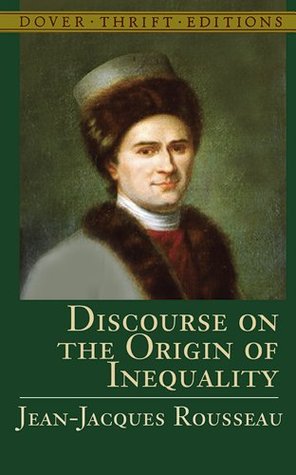 Jean-Jacques Rousseau, Discourse on the Origin of Inequality

If humans are benevolent by nature, how do societies become corrupt? And how do governments founded upon the defense of individual rights degenerate into tyranny? These are the questions addressed by Jean-Jacques Rousseau’s Discourse on the Origin of Inequality, a strikingly original inquiry into much-explored issues of 18th-century (and subsequent) philosophy: human nature and the best form of government.

Rousseau takes an innovative approach by introducing a “hypothetical history” that presents a theoretical view of people in a pre-social condition and the ensuing effects of civilization. In his sweeping account of humanity’s social and political development, the author develops a theory of human evolution that prefigures Darwinian thought and encompasses aspects of ethics, sociology, and epistemology. He concludes that people are inevitably corrupt as a result of both natural (or physical) inequalities and moral (or political) inequalities.

One of the most influential works of the Enlightenment, the Discourse on the Origin of Inequality offers a thought-provoking account of society’s origins and a keen criticism of unequal modern political institutions.

View all posts by mumbletheory