Denise Ferriera Da Silva, Towards a Global Idea of Race

In this far-ranging and penetrating work, Denise Ferreira da Silva asks why, after more than five hundred years of violence perpetrated by Europeans against people of color, is there no ethical outrage?

Rejecting the prevailing view that social categories of difference such as race and culture operate solely as principles of exclusion, Silva presents a critique of modern thought that shows how racial knowledge and power produce global space. Looking at the United States and Brazil, she argues that modern subjects are formed in philosophical accounts that presume two ontological moments—historicity and globality—which are refigured in the concepts of the nation and the racial respectively. By displacing historicity’s ontological prerogative, Silva proposes that the notion of racial difference governs the present global power configuration because it institutes moral regions not covered by the leading post-Enlightenment ethical ideals-namely, universality and self-determination.

By introducing a view of the racial as the signifier of globality, Toward a Global Idea of Race provides a new basis for the investigation of past and present modern social processes and contexts of subjection.

In this short masterpiece, eminent scientist and theologian John Polkinghorne offers an accessible, yet authoritative, introduction to the stimulating field of science and theology. After surveying their volatile historical relationship, he leads the reader through the whole array of questions at the nexus of the scientific and religious quests. A lucid and lively writer, Polkinghorne provides a marvelously clear overview of the major elements of current science (including quantum theory, chaos theory, time, and cosmology). He then offers a concise outline of the character of religion and shows the joint potential of science of religion to illumine some of the thorniest issues in theology today: creation, the nature of knowledge, human and divine identity and agency. Polkinghorne aptly demonstrates that a sturdy faith has nothing to fear and much to gain from an intellectually honest appraisal of the new horizons of contemporary science.

Jean-Luc Nancy, Hegel and the Restlessness of the Negative

At once an introduction to Hegel and a radically new vision of his thought, this remarkable work penetrates the entirety of the Hegelian field with brevity and precision, while compromising neither rigor nor depth. One of the most original interpreters of Hegel, Jean-Luc Nancy offers a portrait as startlingly unconventional as it is persuasive, and at the same time demonstrates its relevance to a very contemporary understanding of the political. Here Hegel appears not as the quintessential dispassionate synthesizer and totalizer, but as the inaugural thinker of the contemporary world—one whose thought is inseparable from anxiety and desire, as well as the concrete, the inconclusive, the singular.

Nancy’s Hegel is the thinker who foregrounds the original, irrepressible, and joyous embrace of the inevitable will to philosophize; he is the philosophical guide who negotiates between the two extremes of stupidity and madness along the path to meaning. In the face of the horror of history and despite the temptation of past-based solutions, this Hegel’s uncompromising foothold in the real makes him our contemporary, a thinker for our time. 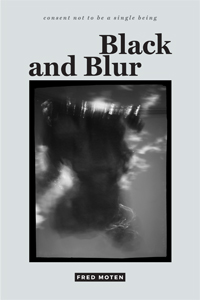 In Black and Blur—the first volume in his sublime and compelling trilogy consent not to be a single being—Fred Moten engages in a capacious consideration of the place and force of blackness in African diaspora arts, politics, and life. In these interrelated essays, Moten attends to entanglement, the blurring of borders, and other practices that trouble notions of self-determination and sovereignty within political and aesthetic realms. Black and Blur is marked by unlikely juxtapositions: Althusser informs analyses of rappers Pras and Ol’ Dirty Bastard; Shakespeare encounters Stokely Carmichael; thinkers like Kant, Adorno, and José Esteban Muñoz and artists and musicians including Thornton Dial and Cecil Taylor play off each other. Moten holds that blackness encompasses a range of social, aesthetic, and theoretical insurgencies that respond to a shared modernity founded upon the sociological catastrophe of the transatlantic slave trade and settler colonialism. In so doing, he unsettles normative ways of reading, hearing, and seeing, thereby reordering the senses to create new means of knowing.

View all posts by mumbletheory